Soil runs dry.
The sun scorches.
Plagues run rampant.
We burn, we are sacked
and pillaged, and destroyed,
Almost like Roma, Roma, Roma.

“Plagues run rampant” is a perfect description of North Carolina in the summer! We have heat, humidity, the occasional hurricane (Hermine is bearing down on us as I write this!), and mild winters. Perfect conditions for plant diseases to flourish. I spray for foliar bacterial and fungal diseases on a regular basis; prevention is better than trying to fight a pathogen after it has established a foothold.

A previous post explained how and why I graft tomato plants, namely for resistance to Fusarium Wilt caused by the fungal pathogen Fusarium oxysporum f. sp. lycopersici. Once Fusarium is in the soil it can remain for over a decade, even in the absence of its preferred host. One strategy to combat the disease is to grow Fusarium-resistant hybrids, which are denoted by the FFF code in the description of the variety (e.g., on the seed packet). A tomato variety labeled VFN is resistant to Verticillium, Fusarium Race 1 and Nematodes; VFFN adds resistance to Fusarium Race 2, and VFFFN is resistant to all three known Fusarium races. Knowing what race you have in your soil can help you decide on varieties to plant. If you have Race 2 in your soil, it will do no good to plant Race 1-resistant varieties!

Going into the details of the co-evolution of Fusarium and tomatoes, while really fascinating to us plant molecular biologists and pathologists, might be a little beyond the scope of this blog post. In a nutshell, the Fusarium fungus has proteins that are recognized by the tomato plant if the tomato plant carries resistance genes. Upon recognition of the Fusarium, a defense is mounted by the plant that stops or dramatically slows infection. This is a somewhat analogous situation to a human immune system.

If through natural selection the Fusarium either loses the gene for the protein recognized by the plant or a big enough change occurs to the Fusarium genes, a defense response in the plant will not be triggered, thus resulting in the wilt disease. This is basically how the races of Fusarium have evolved. Race 1 gave rise to Race 2 via gene loss, Race 2 then gave rise to Race 3 via sequence changes in other genes. It is likely only a matter of time until new races appear that can elude the disease resistance currently used in tomato breeding (there are only a handful of resistance genes currently known and used). Plant-pathogen co-evolution is often referred to as an “arms race” for good reason.

I had three different tomato plants this year that clearly showed Fusarium symptoms (all three were non-grafted plants!), all in different beds. Fusarium is pretty easy to spot: the leaves turn yellow very quickly, sometimes only on one side of the plant because it colonizes part of the stem leaving the other parts unaffected (at least for a while). A cut cross section of an affected stem will look brown and not white. 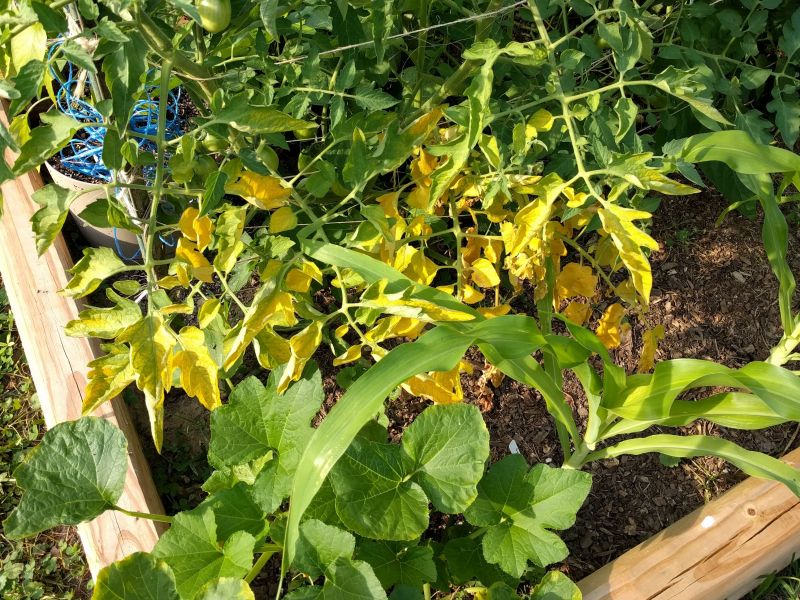 Fusarium oxysporum-infected plant. The yellowing leaves are a telltale sign. Sometimes only one side of a leaf or plant will show the yellowing. Eventually the entire plant succumbs or is severely weakened.

Historically, to determine the Fusarium race, a live plant test was performed: grow tomato varieties with known single-race resistance genes in the presence of the pathogen, and wait for symptoms to show. This, of course, takes time. Recently, the Fusarium genes for race-specific virulence have been determined and sequenced and a quick molecular method to differentiate the races devised (Lievens et. al. 2009).

I chose the molecular method to determine the races found in my garden because results are available within hours rather than weeks, and it’s unambiguous. I’ll walk through the steps with some basic background and hopefully not get too sciencey!

I collected samples of the tissue and had a microbiology lab culture the pathogen on petri plates. The plant pathologist confirmed that the morphology of the fungus on the plates was consistent with Fusarium. It’s not possible to determine the race visually though.

Pieces of the plant tissue were sanitized to remove any microbes on the external surfaces. Pieces were then placed on a sterile petri plate with nutrient agar. After a few days the Fusarium began to grow.

First steps are complete; we have our pure culture of Fusarium, and now it’s time to determine the specific race. To do this we need to extract the DNA from the Fusarium in order to analyze specific genes. In a nutshell, extracting DNA entails freezing the fungus, grinding it up in a mortar and pestle, and using a solution of detergents that basically wash away everything except the DNA, which is left in solution. (This process is done using a commercially available kit.)

After DNA extraction from the Fusarium, we use a technique called Polymerase Chain Reaction (PCR) that makes millions of copies of a single gene of interest, which is called “amplification.” The entire PCR process occurs in a tiny tube in a single drop of liquid and can be finished in a matter of an hour or two. For our PCR we chose to amplify a gene in Fusarium called Avr1. Race 1 has this gene, but Races 2 & 3 have lost Avr1 through evolution, which restores their virulence on Race 1-resistant tomatoes.

Below is a picture of the PCR-amplified Fusarium DNA after gel electrophoresis for each of the fungal isolates from the three plants. It’s pretty clear that the Fusarium growing in plants #1 and #2 contained the Avr1 gene as evidenced by the bright band of amplified DNA, so they are infected by Race 1. Fusarium from Plant #3, on the other hand, shows no bright band, so is either Race 2 or 3. 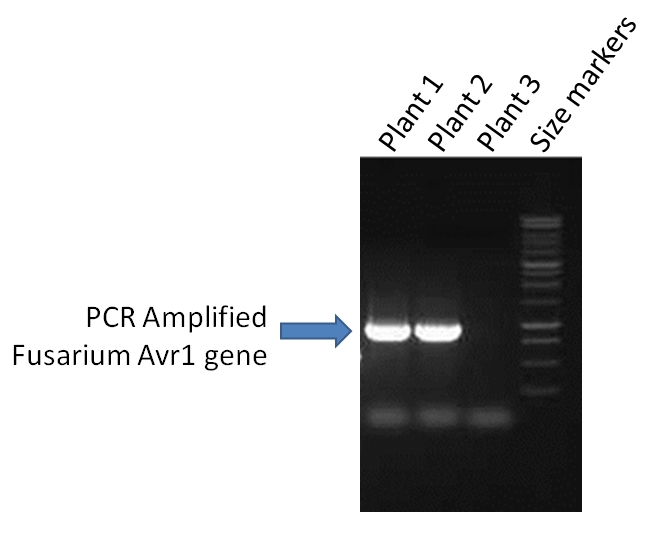 The PCR was designed to make millions of copies of only the Avr1 gene, which is found in Fusarium Race 1 and not Race 2 or 3. If the Fusarium in my plants is Race 1 we expect a bright band to show up on the agarose gel. It’s clear that the Fusarium growing in plants #1 and #2 is Fusarium Race 1 since a large spot of copied DNA is visible. Plant #3 is either Race 2 or Race 3 because no Avr1 was there to be copied and no band shows up on the agarose gel.

To determine what Race I have in plant #3, we needed to go a little farther than just gel electrophoresis. We actually sequenced a portion of another Fusarium gene that we know differs between Race 2 and 3. We sequenced part of a gene called Avr2 and compared it to the sequences found in known Race 2 and Race 3 isolates. The alignment of the DNA sequences is shown below.

The Answer: Two Types of Fusarium

The Fusarium infecting plants 1 and 2 in my garden both contain the Avr1 gene thus they must be Race 1; the third plant’s Fusarium isolate matches the Race 2 Avr2 sequence perfectly and not the Race 3 sequence. So now our mystery is solved, I have two races of Fusarium in my garden!  Lucky me.

What do I do with this information other than sleep well with a satisfied curiosity? Well, it can inform which varieties to grow for fruit or to choose as rootstocks. Race 1 and Race 2 resistance is found in many more tomato varieties than Race 3 resistance at this time, so I have more options.

Now a bit about breeding methods

A number of genes for resistance to Fusarium and other diseases are known and have been sequenced. The genes were introduced into modern tomatoes, with significant effort by breeders, from wild species lacking the characteristics we like to eat, e.g., good flavor, large fruit; some are even inedible. This is great if you want new tomato varieties, usually hybrids, and are OK with somewhat limited choices. There are some excellent hybrid tomatoes out there, like Sungold F1, and I buy seed and grow a number of them every year. Hybrids often have other highly desirable characteristics like improved yield and multiple resistances to other pathogens. A common complaint is that hybrid tomatoes don’t have the outstanding flavor of many “heirlooms.” I won’t get into that contentious tomato-geek debate in this post, other than to say making a generalized statement about hybrids and heirlooms is silly! There are excellent hybrids, horrible hybrids, excellent heirlooms and horrible heirlooms.

So what are you supposed to do if you want to grow your beloved heirloom Brandywine or Cherokee Purple or any of the other thousands of varieties out there if Fusarium is a problem for you? You can spend hours grafting onto resistant rootstock like I do, but that won’t help with the myriad other diseases. You could also just be happy with the few fruit you get until the plant succumbs. There is always the grocery store or farmer’s market.

But, what if we could use new plant breeding techniques to quickly introduce disease resistance genes into our favorite varieties without changing any other characteristics?  VFFFN Brandywine!

Yes, I’m talking about genetically engineering tomatoes so they contain the very same resistance genes introduced into modern hybrids through traditional breeding. It would be easy to insert the Fusarium-resistance genes (or other disease resistance genes) into our favorite heirloom tomatoes while maintaining all the other qualities we love!

Unfortunately, there has been so much disinformation, fear, uncertainty and doubt spread about modern molecular breeding techniques that nobody will undertake this in the foreseeable future. There is simply not enough economic incentive to do so. A highly effective bacterial spot-resistant transgenic tomato that relies on a gene from peppers has languished in limbo for years now and may never see a farmer’s field, much less my backyard.

A newer breeding technique known as genome editing, e.g., CRISPR/Cas, is another potential way to achieve disease resistance by precisely changing target genes while maintaining all the other characteristics of the plant. The technology is still in its early days and the jury is out on how the public and regulatory agencies will be led to view and control it. My hope is that education will trump fear and ignorance and that we will apply science and technology to its fullest for the betterment of agriculture as well as in the garden!

Report to the National Academy of Sciences:  Genetically Engineered Crops: Experiences and Prospects

Many thanks to The Wife, a non-scientist, for discussion, proofreading, and editing to make the post so much better than the first draft!