Here we are in April with its mild days and chilly nights.  A frost isn’t out of the question.  Still about a month from planting out of most of the warm season vegetables.   I’ve been meaning to do a post on tomato grafting and what better time than a chilly April Sunday afternoon!

Plant grafting is nothing new.  Anyone that has perused a gardening catalog with fruit trees listed will have likely  seen the same variety of fruit tree in full, semi-dwarf and, dwarf size.  This is accomplished by grafting the desirable variety (called the scion) onto a dwarfing variety (the rootstock). It’s not well understood how dwarfing rootstock works but it most likely involves plant hormone balance and nutrient transport from rootstock to scion.  Apart from dwarfing there are other reasons to graft plants such as disease resistance/tolerance, improved growth characteristics of the scion and other.

There are even trees with many different varieties grafted onto a single tree like this one with 250 varieties of apples!

A common question is whether the fruit produced from a grafted plant is genetically the same.  The answer is yes, seeds saved from a Brandywine tomato grafted onto a different rootstock are still Brandywine tomato seeds (barring accidental crossing).

In the case of tomatoes, the main reason for grafting is soil borne disease resistance.  Many desirable tomatoes are susceptible to pathogens like Fusarium, Verticillium and nematodes to name a few.  These can be devastating pathogens that lead to total loss, thus many commercial hybrids have been bred to resist these pathogens.  Great for commercial growers but not so great if you want to grow heirloom varieties which typically lack any disease resistance (or even hybrids that lack disease resistance!)

Another common question is whether grafting changes foliar disease resistance.  Sadly, no. Grafting onto resistant rootstock does nothing for foliar tomato diseases.  So if your main problem is Early Blight there is no grafting solution, you are stuck with some flavor of chemical control.  In my case, I battle Fusarium oxysporum every year.  There are no good chemical controls so I concentrate on a healthy soil so the good guys can out compete the bad guys and now by grafting tomatoes onto highly resistant rootstock.

There are a number of tomato varieties produced solely for rootstocks available now.  They are always hybrids and are most likely crosses of wild tomato species with domesticated tomato.  The fruit they produce is inedible and saved seed will not be true to type.  I wont go into all the varieties and their attributes here but I chose a hybrid variety with three race resistance to Fusarium as denoted by the VFFFN designation (V=Verticillium resistance, FFF=three race Fusarium resistance and N=nematode resistance).

The process is pretty simple sounding but takes a lot of practice!  I would suggest  practicing on cheap plants to get the technique down!  The special hybrid rootstock seeds are quite expensive, 50 seeds may run you >$20.

You can use less expensive more typical edible hybrids that carry disease resistance too, just look for the V and F designations.  You wont get the other benefits of the inedible hybrid types though such as improved vegetative growth and/or increased yield.

Here are some things I’ve learned over the years to get an acceptable grafting success rate.  There are several ways to graft tomatoes, Japanese style and cleft grafting being the most popular.  In Japanese style the rootstock and scion are cut at matching angles and held together with a clip. In cleft grafting the rootstock is cut and then split down the center.  The scion has a wedge cut on the end which fits down into the split stem and then held closed by the clip.  By far my best success has been with cleft grafting.  It’s more labor intensive initially but makes up for it my opinion in higher success rate, more tolerance for stem diameter discrepancy between rootstock and scion and stronger final graft union.  Most of what I’ll show below is cleft grafting but many of the principles are the same for Japanese style.

One of the most difficult parts of grafting is the timing.  You want the stem diameters of the rootstock and scion to match as closely as possible.  There can be quite some variability in plant growth rate between varieties esp. hybrid to heirloom.  My suggestion is to plant rootstock on several occasions spanning a few days to a week before and after sowing of scion varieties, especially when first starting out.  It might be advantageous to keep notes on average growth rates of the different varieties as well.  The lab scientist in me has never died!

First, cleanliness is mandatory!  You are going to be wounding your plants, exposing their insides and keeping them in nearly 100% humidity for a week or more.  This is the perfect breeding ground for opportunistic pathogens.  Clean your work area and wash your hands. I’ve even been known to wear nitrile or latex gloves….Darn it, there’s that lab scientist in me again!

The tools you’ll need are scalpel and surgical blades (available cheap on Amazon, I like #11 blades but there are others to choose from). Do I need to say be careful with the scalpel blades? Especially when removing or installing the blade on the scalpel holder…*surgical* should give you some clue as to how sharp these are!

Razor blades work but aren’t as sharp or easy to handle for me since you want to sanitize frequently.  Don’t use something like a box cutter which is not nearly sharp enough to get a good clean cut and difficult to sanitize.  Have a small jar of 70% denatured alcohol ready for sanitizing your scalpel or razor blades.  You’ll want to do this frequently.  In fact, I have two scalpels, one is in the alcohol while the other is being used and I swap them every few min.  Make sure to completely dry the blade of alcohol on a clean paper towel before cutting, you don’t want any on the plant material.

Clean work area and cutting board.

You’ll also need silicone grafting clips, I got mine from hydrogardens for a few dollars per 100.  Being silicone they are reusable should you like, after boiling for a few min to sanitize them.  The clips come in several sizes from 1 mm to 2.8 mm.  I have not had success grafting very young seedlings, I wait until 2 true leaves or a little older so the 2.5-2.8 mm clips work well for me.

Choose rootstock and scion plants with stem diameters that match as closely as possible.  Cut the rootstock off below the cotyledons straight across.  There is no absolute requirement for this but keep in mind that you might get rootstock “suckers” from the nodes at the cotyledons,  just remove them later if they grow. Now cut straight down the center of the stem to make a split about 1/4″-3/8″ long.

Rootstock cut down the middle

Once the rootstock is ready cut the scion.  Find a place where the stem diameter matches the rootstock.  Cut most of the leaves off and lay the scion down to cut it.  Make a wedge on the bottom of the scion by slicing off from both sides.  the objective is to make a sharp wedge about the same length as the split rootstock.  This takes practice and where very sharp scalpels help.  You want to work as quickly as possible as the plant is losing water the whole time you are working with it.

Trim almost all the leaves off the scion leaving the small ones. 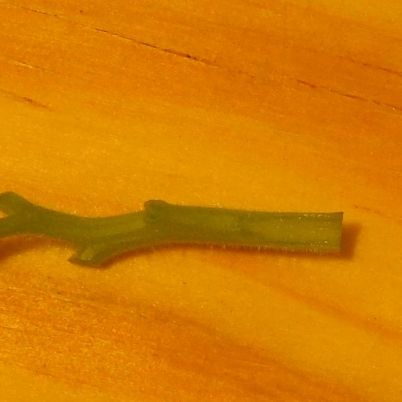 First cut to make a wedge at the bottom of the scion. Flip it over and make another cut. It takes a little practice to get a symmetric wedge that’s not too thick or too thin.

Final wedge. Could be a little thinner at the tip but looks OK.

Slide the scion into the cleft. If it doesnt fit all the way down in split the root stock a bit more or make the scion wedge thinner.

Hold the scion, squeeze the clip to open it up and slide up to cover the graft.

The wedge should be down into the cleft. Open the clip and push the wedge down gently if necessary.

Now comes the waiting part.  You need to put this grafted plant under high humidity for a week to 10 days!  Some guides advise complete darkness for a few days, I’ve found that totally unnecessary and even detrimental.  I make a humidity chamber (pictured below are tomato clam shells) and then place back under the normal fluorescent light regime for seedlings (16 hr light 8 hr dark).  Make sure you maintain humidity.  Since the clam shells have small holes they need to be misted at least once per day.  Don’t saturate the leaves which just invites rotting.  Mist the sides of your container.   If the container is completely sealed (many people use plastic totes) you wont need to mist after the initial one.  Allow to heal for a week or 10 days.  You might see some slight wilting if the humidity is not high enough.

Humidity chambers can be made out of almost anything. I like something with a few holes to allow air exchange but it requires misting daily or twice daily. Many people use Rubber Maid containers. Spray down the walls of the container but avoid water on the leaves or the leaves from touching the sides which can cause pathogens to grow. You’ll need to keep under these conditions for a week to 10 days.

After a week allow the humidity to slowly lower by cracking your container open, or if using something with holes, stop misting it.  You should see no wilting after a while.  Each day open the container a bit more.  If you see wilting, it’s not quite healed enough. Return to higher humidity conditions for a few more days and then try again.

If successful you’ll have a great graft union and healthy plant!

You can remove the clip after a few weeks or just let it fall off.  Don’t remove it too soon as the union is still knitting together and gaining strength. 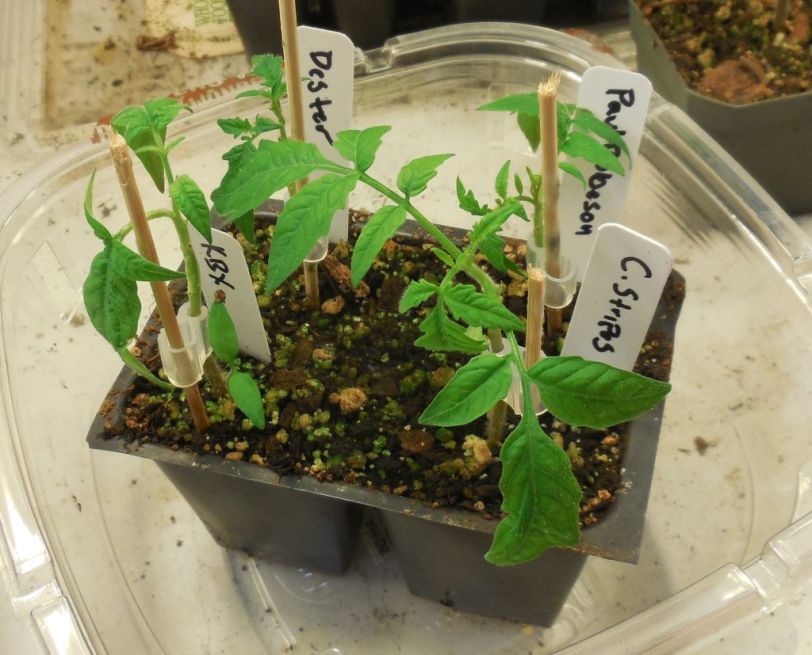 And a not so successful graft!

A note about Japanese style grafting.  It’s popular but in my cludgy hands not so successful.  It takes only two cuts and is quick.  Cut the rootstock and scion at 45 degree or sharper angles where the stem diameters are an exact match or extremely close.  Some people line them up and cut them together so the angles are identical and they can feel the diameter of the stem.  Slide the clip onto the roostock halfway and the scion down into the top of the clip so the cut surfaces match.  Now into the humidity chamber as above.  Much simpler in theory!

Here is a picture of a successful graft I did this way. Note it’s above the cotyledons so suckers may need to be removed. 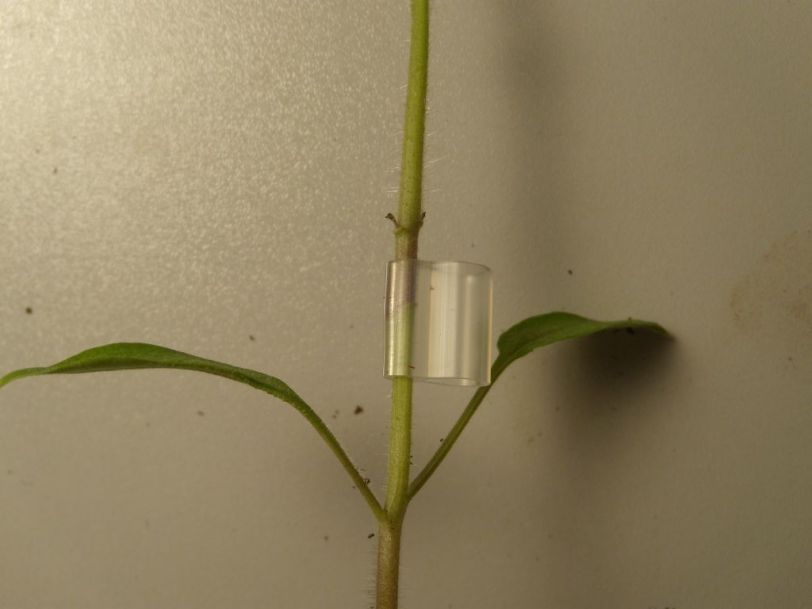 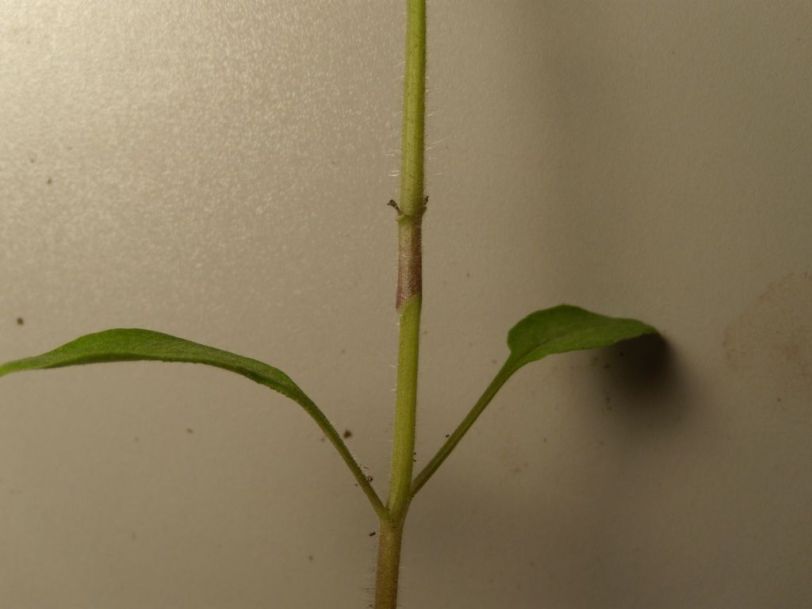 When you plant your grafted plants in their final spot it is critically important that you not cover the graft union.  You do not want roots to grow out of the scion part of the plant which would defeat the purpose of grafting onto resistant rootstock.

And one final note, don’t forget to add about 2-3 weeks onto your normal seed starting schedule to allow for the grafting and healing process.  As with many things practice will help you get a schedule down.  Did I mention making notes?  I mean you do have a gardening journal, right??

And, if all else fails, there is a machine that can do it all for you!