The Mushroom is the Elf of Plants

Yep, it has been a while, intrepid followers!  Latest project?  Mushrooms.  Yes, that’s right, mushroom growing.  No, not THAT kind of mushrooms!

The problem: What does one do with a 35 foot tall, ratty, volunteer maple tree growing in the neighbors lawn, right at the property line, which has begun to lean over toward your house?

The solution: Pay a local tree guy 60 bucks to get it safely on the ground and and use it to grow mushrooms, of course!  The neighbor gets none since it was my 60 dollars…

First step: Cut the tree into manageable 4′ lengths and remove any of the twigs/small branches.  The trunk portion and few branches that were at least a couple of inches in diameter were saved for this.  Anything smaller was cut up to use for smoking chicken, turkey and salmon. Final tally was 10 logs and one round to use for inoculation.

Second step: Order mushroom plugs!  I ordered from Mushroom Mountain in South Carolina.  They were very friendly and responsive when I asked questions and their prices with shipping were quite fair.  They have some gorgeous strains of mushrooms like:

Third step: Drill 5/16″ holes 1 1/4″ deep.  Marked the depth with some electrical tape on the drill bit.  I used a yardstick for the first line of holes placing each one 6″ apart.  After that I rotated the log ~1/4 turn and drilled holes in a line so that this row was in the center of the previous row.  At the end I got 4-5 rows of holes placed in a diamond pattern all the way around the log.

Log with drilled holes. The first line was spaced using a yard stick.  Subsequent lines were “eye-balled” to be approx 6 inches away and off center. 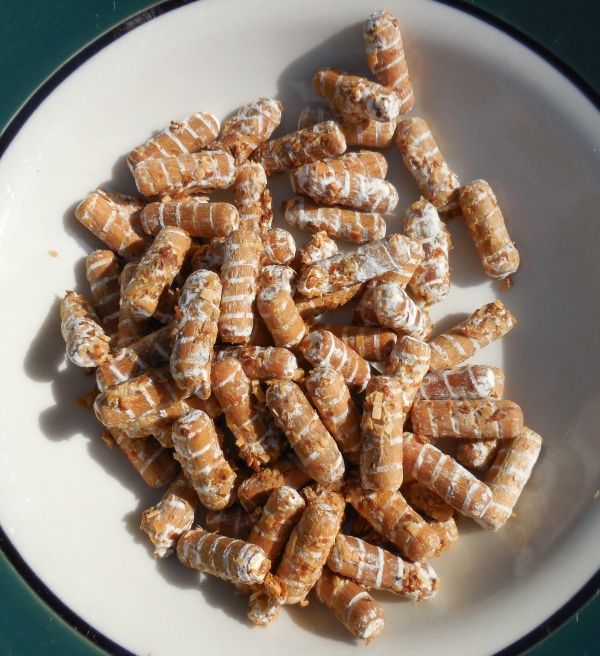 The plugs are wood dowels that have been grown in a pure culture of the fungi. The white coating is the strands of the fungi called mycelia, the fungal structure that invades the wood and degrades it.

Insert a plug into the hole and then tap it in so it’s flush with the bark. That’s it!

Each 4′ log got approx. 30 plugs.  In the end the final count was: four oyster logs and one round inoculated.  Six Shiitake logs inoculated.  The process took me a couple of hours.  the expectation is that the log will produce 1 year for every inch of diameter.  I expect several flushes of mushrooms each year.  I’m not sure how many pounds of mushrooms each flush will be though.  Now we wait 6-9 months keeping the logs in the shade up off the ground and moist. 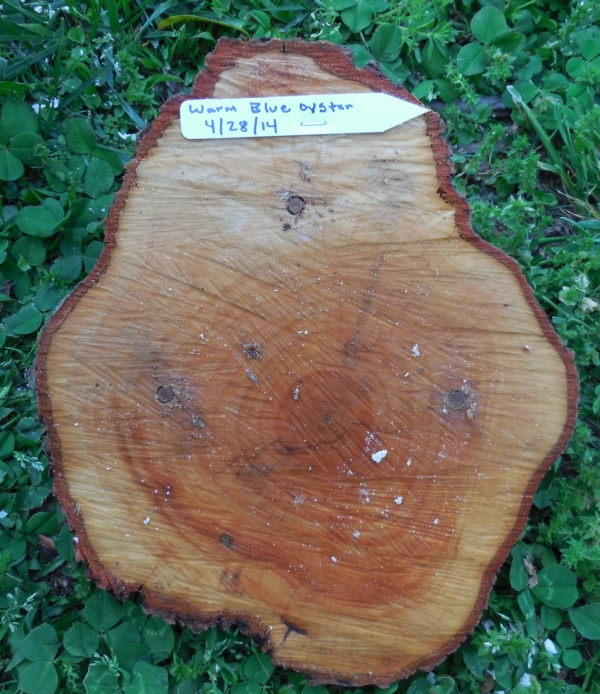 Round inoculated with Blue Oyster. 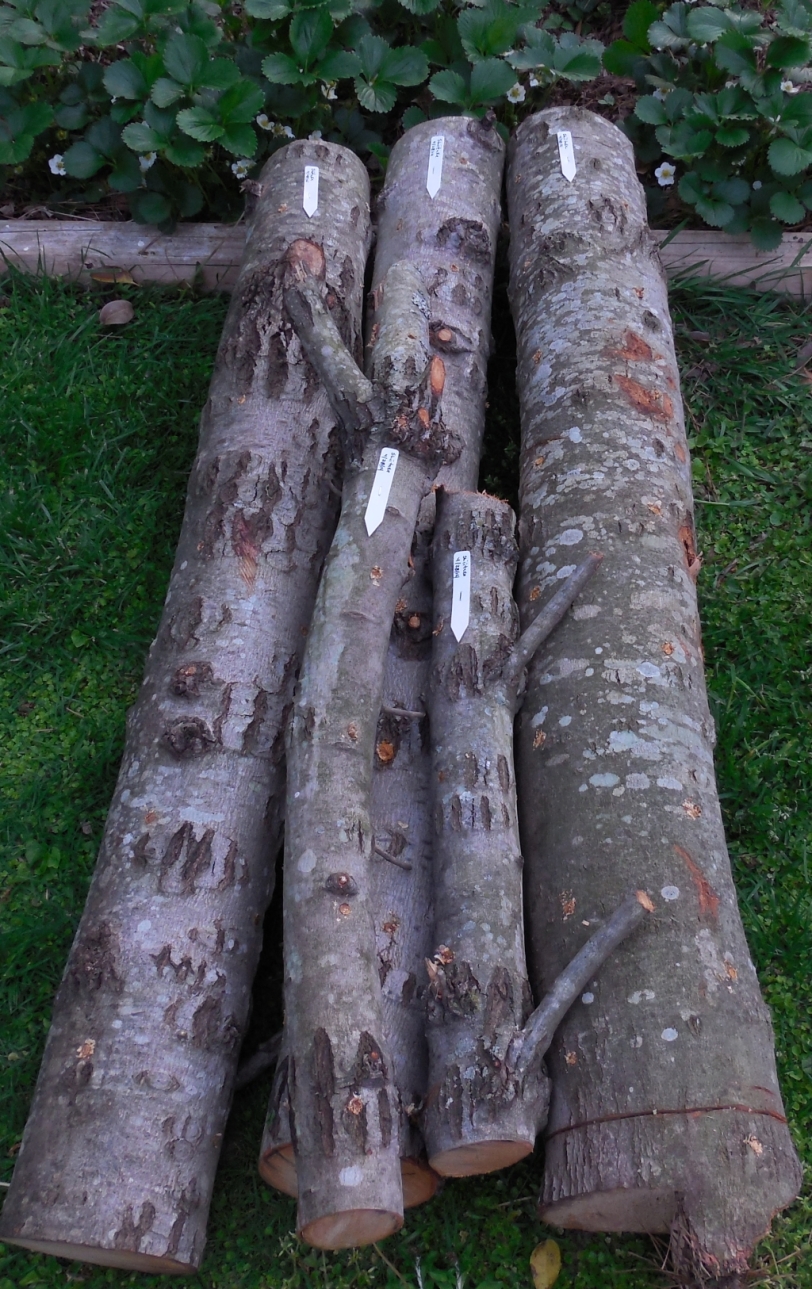 If this works well, I’ve been eyeballing an ugly Sweet Gum tree in that yard that would grow some tasty ‘shrooms…

The bag that the plugs came in had quite a bit of the grain that the fungi is initially grown on in it.  Well, I can’t throw something like that away!  Blue Oyster mushrooms will happily grow on anything that contains cellulose (coffee grounds, shredded paper, old t-shirts, hay, you name it, if you can pasteurize it and it has cellulose the fungi will chew it up).  So I grabbed a cardboard egg carton and some shredded paper from the office.  I soaked the paper in warm water for a few hours (I didn’t bother pasteurizing it).  After draining and squeezing it out gently so it wasn’t dripping I packed a layer into the egg carton.  Then I sprinkled the leftover grain spawn on top.

A layer of wet shredded paper then the remaining spawn was added.

I added another thick layer of wet shredded paper to completely fill up the carton. 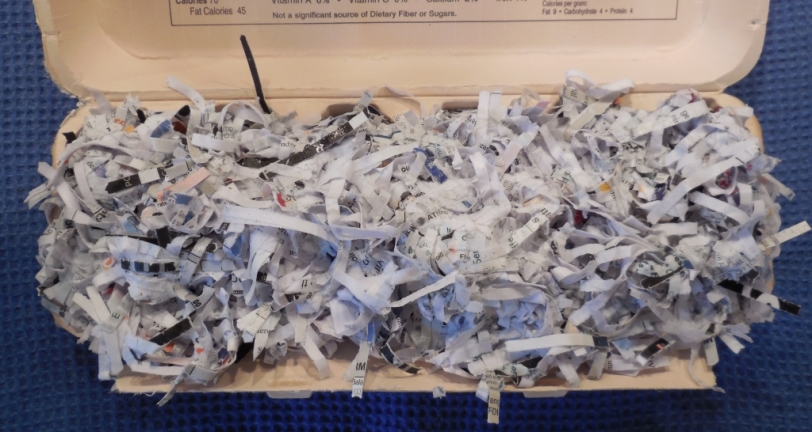 Close it up, place into a bag to maintain moisture and put in a warm place.

Wrapped and ready to grow!

In a couple of weeks I hope to see the mycelium growing out an on the egg carton.  At that point I’ll unwrap it and cut a slot in the top to expose to light which should stimulate mushroom production.  Updates if/when this works!

One thought on “The Mushroom is the Elf of Plants”